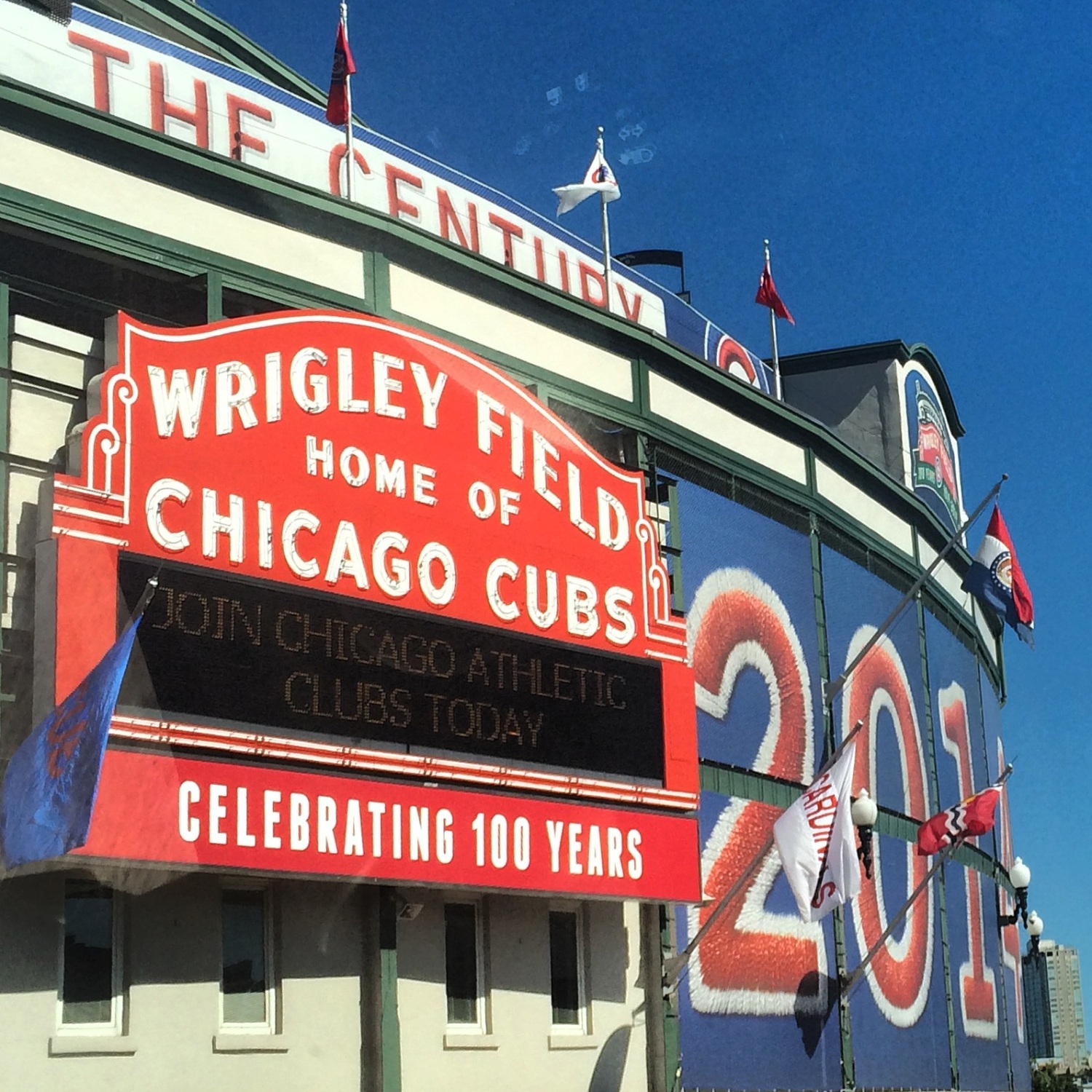 Driving into Chicago, my dad starts asking how big is the actually city, so I look the details up on wikipedia. Chicago is the 2nd largest city in the US. The city proper is 230 square miles, but the ChicagoLand area is over 2000 square miles. So this place is huge. The KOA we spend our first night in is 55 miles out of the city area and an one and a half hours out of the city. This was the closest official camping we could find near the city.

We’d been watching the storm clouds gather all day, and when we finally went to bed the storm passed over. This was a beautiful thunderstorm, with most of the lightning heading up into the atmosphere. So even when it was right above us it sounded far away. However, the strong wind and heavy rain definitely showed that the storm was overhead.

The other benefit of the storm was that I found out Lindsey, my friend from grad school, was experiencing the same storm. (Oh, the wonders of Facebook). I had no idea I was that close to where Lindsay is now living. So we meet up the next morning and have a great breakfast! It was great to spend some time catching up with someone I respect so much. One of the many topics we discussed was belly dancing, which Lindsay loves to do. She sent me some great videos to watch, so when I get back to Oakland I’ll take some classes.

After a great breakfast, Dad and I head into Chicago proper. Our first stop is Millenium Park. We walk into the park off of Madison, and are greeted by a magnificent statue of a woman’s head. It is all white material and is stretched so it plays with perspective when viewing it.  Then we headed up a few stairs to see The Bean. 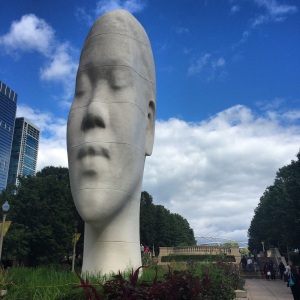 The Bean is a very odd piece of art. It is a chrome-plated, reflective sphere shaped like a been. But it is wonderful! Every step around the Bean is a different view and a different reflection. Everyone who is visiting the Bean is playing around and interacting with the art. It is the most joyful interaction with art I have ever had. It was wonderful to watch everyone else take pictures and laugh. So no matter how odd the Bean might be, it is brilliant for the interaction and joy it brings.

Next, we headed over to the North Pond area of Lincoln Park. What a beautiful nature preserve for the city. The pond had geese and ducks enjoying the water. And it was a gorgeous contrast of the huge skyscrapers of downtown Chicago to the peaceful park. We then walked over to the Marina and out to Lake Michigan to look across the water and then across the Chicago skyline. 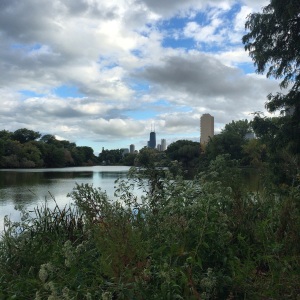 Finally, hunger called and we went to the Wicker Park neighborhood to grab some grub. My high school friend James spent years living in Chicago and gave lots of great recommendations. He recommended Wicker Park as an artsy and lively neighborhood to check out. I loved the architecture of the area with smaller brownstones and an incredible 6 point intersection at the heart of the neighborhood.  It was already getting dark, so there was not much time for exploring. I found Piece Pizzeria and Brewery, which had a line waiting out the door, but there were two seats open at the bar. We walked passed the huge line waiting and sat down at the bar. The pizza was not deep-dish Chicago style, but it was still fantastic. The red sauce had a great savory flavor with both mozzarella and parmesan cheeses to complete the base. It was choose your own toppings, so we went with my favorite – mushroom, onion, and pepperoni. Then I had two beers this evening to wash down the pizza. The first was a belgian ale which was smooth, balanced, not too hoppy, and flavorful. Then I had a red ale, which was a bit stronger and had more hops, but still balanced and super good. Piece is a great craft brewery.

It was late and time to find a Walmart parking lot to camp in. There is definitely not camping available within the city limits, and I’m trying to keep this journey as inexpensive as possible. So the closest Walmart that allows camping is 15 miles out of the city center in Mount Prospect.

The next morning, we do the first round of car maintenance and get an oil change. Yes, that means we’ve been out for 5,000 miles!!!!!! Traveling and putting your car into the hands of an auto shop that you don’t know can be a bit worrisome, even if dad is a mechanic. However, Busse Auto in Mount Prospect were fantastic. A woman came in with an issue with her car, and she was clueless about cars. From the recommended fix from the mechanic, we could immediately tell they had no intention of taking advantage of her. Everyone that worked there were pleasant and finished the oil change within an hour. So if you are on a road trip and in the Chicago area, Busse Auto is a good place to stop for auto maintenance.

So after the chores are done, we head back into Chicago and meet Tracy, a colleague who works at WEG, for lunch at Uncommon Grounds. Another great lunch, with the breakfast burrito being super tasty. The atmosphere of the cafe was super cute and comfortable. Unfortunately, my cappuccino was way too hot and the milk burnt a bit. (I’m so damn picky when it comes to coffee now.) It was fantastic to catch up with Tracy, and enjoy lunch. I kept asking her how she got out of all her meetings, since I know my old friends at SAP can keep her on the phone all day 🙂 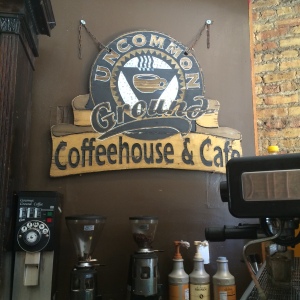 From lunch, we head into downtown to do an architectural boat tour of Chicago, which Tracy had recommended. What a cool way to explore the city and see all the amazing skyscrapers. The docent named all the architects of these magnificent structures, plus mapped out the history of the city as we floated along the rivers in heart of Chicago. It’s only an hour and a half tour, and I recommend it as a must do for a Chicago visit. My favorite building was Aqua, which I was not able to get a good photo of since it was set back behind some other buildings. I also loved Marina Park and River Park because those buildings stood out as the most unique against the skyline. 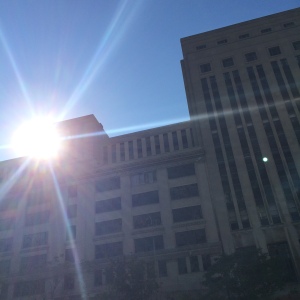 After the tour, we went on a hunt for a Chicago Dog. The first place on the list was right in the heart of the tourist district with a Hard Rock Cafe and Rainforest Cafe across the street. Even though the reviews were good, I couldn’t believe that it wasn’t a tourist trap nightmare. So we continued over towards Wrigley’s Fields. Unfortunately, there was a Cubs game that night and traffic was a mess. We still had plenty of sunlight left, so I decided we’d go back to Wicker Park so I could walk around and explore.

As we pulled into the Wicker Park neighborhood, we parked right in front of Metamorph Tattoo, which both James and my brother told me I had to stop. There friend Jacob who relocated to Chicago is now a sot after tattoo artist, and works at Metamorph Tattoo. Unfortunately, Jacob was not working that day, so I left my card. However, we did meet two of Jacob’s colleagues. I’m so bad with names, and I wish I could remember because they were fantastic.

We then walked down towards the 6 point intersection at the heart of Wicker Park to look at all the buildings and check out the restaurants. We stopped at Links Taproom, which is a new place in the neighborhood. They were having an Octoberfest celebration with beer reps from local breweries showcasing their beers. Plus, da Bears were playing the Jets that night. I loved Links Taproom. Everyone was super friendly, the hamburger was one of my favorites on the trip so far, and the free beer from the reps was perfect. We ate at the bar, and I met Ann who was about to leave Chicago for LA after ten years. She is the lovely lady who took the picture of dad and I in the bar, so we could remember the stop. Our bartender had just moved from Santa Cruz two months ago. I believe he’s only seen Chicago at its best weather, and as we leave I wish him luck on surviving his first Chicago winter. 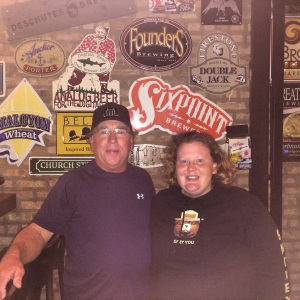 Then we head over to the Flat Iron Bar, which is covered in amazing murals. The murals are all done by artists from the neighborhood. I explored the bar and then grabbed a whiskey mule to watch da Bears go from winning the game towards their decent into loss.

Speaking of murals, Chicago has a ton of great street art. I didn’t get much time to explore the art, which is another reason I have to come back. But here are a few of my favorites I found in Wicker Park, just walking a few blocks. 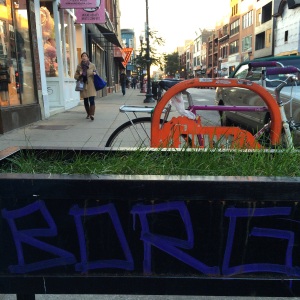 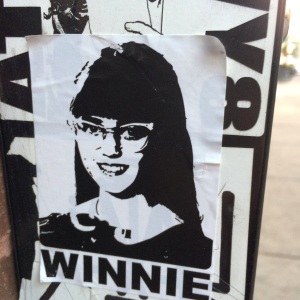 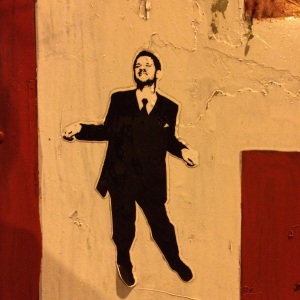 Finally, I decide there is so much to see and do in Chicago that there is no way I’m going to be able to cover it on this journey. Plus, the stress of driving through the city is getting a bit overwhelming and I prefer to tour by walking and public transportation. So we decide this is our final day in Chicago, and we’ll head towards Indiana and continue on the road trip. I did enjoy Chicago and can’t wait to get back to explore more, but it will be much easier to do if I don’t have my dad in tow. 🙂