Because of the delay to starting the journey, I wanted to get to Glacier as quickly as possible since the park was already getting cold and starts to close down later in September. So I modified the route so we would head straight up to Missoula and then to Glacier rather than heading to Jackson Hole and Yellowstone Park. I’m pretty lucky to have my parents live only 6 hours from Yellowstone, and my dad and I love to go fishing on the Madison. So I will definitely have another opportunity to go back to Jackson Hole and Yellowstone, but I decided there was plenty of new places for me to see and skip these on my road trip.

Rather than doing the faster trip to Missoula by heading over to I15 N, we decided to take the longer route through Idaho and the Sawtooth Mountains. I am so happy we made this decision, because it was a breathtaking and extremely enjoyable way to go. We headed north out of Twin Falls towards Ketchum and Sun Valley, Idaho.

Just 30 minutes north of Twin Falls, we ran into a graveyard of classic road construction tractors and equipment. There were drag lines and mechanical front-loaders. I was super amazed by the steam-powered tractor. Definitely an unusual place to stop for my road trip, but really a perfect stop for the middle of rural Idaho. 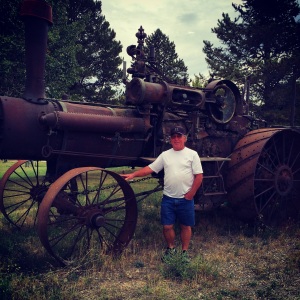 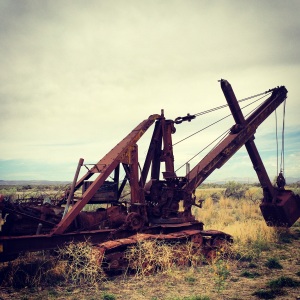 Idaho is mostly farmland and small towns. Most of the population work very hard for very little money. The economic disparity is really obvious driving towards Sun Valley. There are humble homes across the landscape and trailers spread across the fields. But as soon as we pull into the valley near Ketchum, there are huge, fancy ranches taking the place of the modest homes. I’ve been to Sun Valley once before, and it reminded me of all the things I don’t like about visiting Los Angeles, so we just sped on through. Plus, we had the Sawtooth Mountains to journey through very soon.

The Sawtooth Mountains were incredible. The name fits the mountains perfectly. The peaks are jagged and layered far into the distance. Large grassland/farmland valleys spread out between the different peaks and layers. There was one valley that my dad said reminded him of the opening seems of the TV show Bonanza. Finally, we pass the headwaters of the Salmon River and slowly watch the river take shape and flow down the canyon. 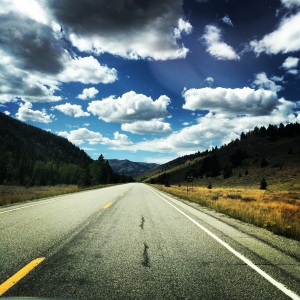 We follow the river to Challis, Idaho where we stop to eat and sleep for the night. Dinner was absolutely fantastic. We stop at a mom and pop joint called the Y Cafe. They do old-school comfort food cooking while trying to use regional foods. Plus, the cafe had an awesome sign calling the dinners in. The lovely people in the restaurant recommend a fantastic camping spot for us down the road that was right on the Salmon River. So we head there to relax and my dad tried to fish without any luck. But after the sun set, the huge full moon rose above camp. It was so bright, I could walk without my headlamp. Two bats decided to swoop down and check me out since I had no light. Definitely, the closest I’ve ever had bats come.

In the morning, we head out to Salmon, Idaho. As we follow the river, I see the turn out that my sister-in-law, Syd, recommend we take. We turn up a dirt road to head to two gold-mining ghost towns. The creek running down the canyon has been completely dredged to dig up all the gold, and the landscape of the creek has been completely destroyed. The dredging happened all the way up until 1952, and the old dredger is still sitting in the creek. The remnants and decrepit log cabins of the ghost towns, Custer and Bonanza, still remain up the canyon. The old general store/Saloon still stands as well as a cemetery up on the hill that had remains from the 1830s and on.

The gold rush towns were a very fun detour, but we had to head on to Salmon. Salmon was a small Idaho town in a valley below the Sawtooth Mountains. We speed through the town and head up the mountain pass that will take us from Idaho into Montana.

We drive into Missoula, Montana which is a college town with a nice old town with a beautiful river running through. As we are driving on 93 into town, I look over and see Cafe Dolce, which is where we have to stop for food and coffee.

This is the restaurant that my friend, Molly worked her way through school and met her boyfriend, Daniel before they moved out to San Francisco. Thanks to Molly, or Montana Molly as some call her, we had lots of great tips on where to visit and eat. Cafe Dolce was definitely fantastic. We had a salami sandwich with corn chowder, which was so tasty and my cappuccino was superb!

Then we had to drive into town to the local FedEx store, so my dad could pick up his Montana fishing license and his National Park Golden Gieser Pass which he forgot back in Utah. Hopefully, we won’t have too many of these FedEx detours.

Finally, we were off to explore the list of sites that Molly had recommended! First stop was the Montgomery Distillery, which makes it’s own gin and vodka and are working on a whiskey. We weren’t able to tour the distillery because it was under remodel but I did have a couple of fantastic cocktails. The ingredients were high quality and fresh, but the cocktail still only cost $6.00. 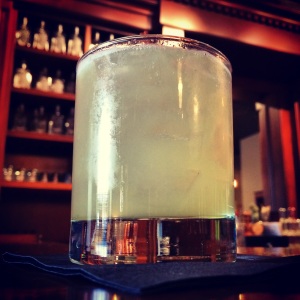 Then I headed across the Higgins Street Bridge and look out across the Clark Fork River. There was a storm coming in from Canada, so the clouds were just spectacular.  The bridge was also one of the best places to see the “M” up on the hill. Walking back on the other side, there is an old piano in the square off the bridge. A young woman was sitting there playing the piano and signing beautifully. I had to stop and enjoy the music for a bit. Then we continued on the walk around the old part of town. The highlight of the walk around town was finding molly’s book, Goodnight Missoula on display in a toy store window. 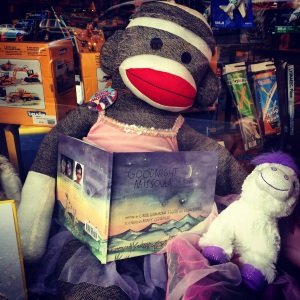 After driving all morning and then exploring town, it was time for dinner. Biga Pizza did the trick. All of the ingredients were locally sourced and you could taste the quality. The pesto pizza was so tasty, and it was fun to sit at the bar and watch the pizza tosser work his magic. I washed down the pizza with beer from a local brewery, Kettlework Scott Ale. It was a perfect combination. 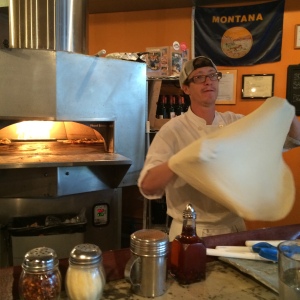 After dinner, we headed out of town to look at a few fishing holes. We went over to the Blackfoot River, which is the same river filmed in A River Runs Through It. The river was perfect for wading fishing, and neither my dad or I have waders with us. So there was no fishing this night, but it was still wonderful to see this river.

To wrap our visit in Missoula, we headed to Blackcoffee Roasters to get caffeinated for the day. My cappuccino was smooth and not bitter. Dad’s coffee was rich and flavorful. This coffee was just as good as the coffee from back home!

Driving out of Missoula from the freeway, I can see the yellow and green of John Deere and there is a huge Triple W sitting on top of the hill overlooking Missoula. We had to stop. My dad went in and bought a couple of hats, which you’ll see us both wearing in pictures from now on! 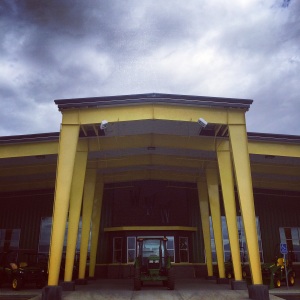 After much discussion, we finally pick the route to Glacier and head out on HWY93 to Flathead Lake. Flathead Lake is the largest fresh water lake west of Mississippi. It is a huge lake with islands and surrounded by large pines. We take the eastern route around the lake, which took us to the Flathead Lake Brewery. This lake is great habitat for Bald Eagles. I saw two of these incredible hunters! It hard to understand how they are so great at capturing their prey, but be so huge at the same time.

We walk into the brewery, and it is packed. The only seat is a large table at the front. We sit and order some lunch. A couple from Canada walk in and no tables left, so we invite them to eat at our table. This lunch turned into a great conversation filled with hunting stories and tall tales. My favorite story was about Grandpa Martin, who was not scared of bears at all. He’d been know to chase them straight out of camp. A grizzly wanders into camp and goes after the food. Grandpa Martin comes running out with his baseball bat and knocked the grizzly out cold. Fish and Game then came out and moved the bear out of camp. I definitely have a lot more respect for the bears. We have bear spray in our car, and sleep with the alarm fab if we need to scare the bears away. There is no way I would ever want to be close enough to a bear that I could hit it with a bat. 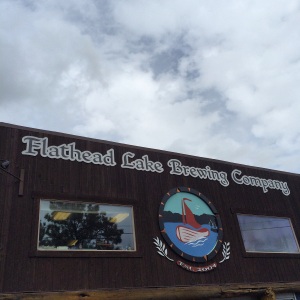