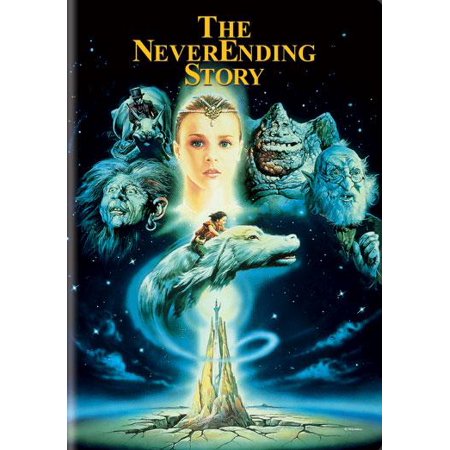 The NeverEnding Story was one of my favorite movies growing up. When I saw it was playing at Brewvies for brunch on Sunday, I knew I had to go. But one of the things I noticed is that when people think about The NeverEnding Story, they mention how sad it is. I had that reaction from a few friends when I said I was going. I also see it on social media – Artax’s death is a source of much sadness. However, I find The NeverEnding Story to be one of the most inspiring and hopeful movies, and that’s why I love it so much. When I think of the state of the world with Climate Change, immigrants being locked up and children caged at our boarders, mass shootings, and other terrifying things going on in this world, I found lessons from The NeverEnding Story on how to make my way through our world with hope.

It is heartbreaking especially for a young child to see Atreyu lose his beloved horse Artax in the Swamps of Sadness. But even today, I find that scene incredibly powerful. Life has sadness. We can’t escape it. We have to walk through it and experience it. However, we have a choice to let it take a hold of us and let it eat us up or we have the choice to keep moving. Even after Atreyu loses Artax, he remains sitting on top of the swamp. He is sad and mourning his friend. He experiences sadness and he feels the pain, but that’s what it is an experience and feeling. It is not him.  It does not consume his heart. He knows he has to keep moving and keep going on.

Atreyu does start to sink in the swamps after his meeting with Morla, the ancient one, when he’s lost his hope. But he is saved by Falcor, the luck dragon. It always helps to have a little luck, but for me I’m more likely to believe in magic than I am in luck. So, I don’t think that it is luck that saves Atreyu and gets him through to the Southern Oracle. I’ve always liked the quote “luck is when preparation meets opportunity,” from Senaca, which is partly what is going on with Falcor. But more importantly, the message is that we can’t do this journey alone. We need our friends and support systems to help us through hard times in life. Also, the message is that we are never actually alone. When Atreyu felt the most alone in life, that’s when Falcor came through. Often in my life, when I feel the most alone, it’s a feeling I’ve created in my own head. I’m not actually alone, I’ve just blinded myself to all the support and love I have. I’m so grateful for the Falcor’s that have come along in my life to remind me I’m not alone.

I’m not saying that facing the challenges of our world aren’t scary, because they absolutely are. The challenges that Atreyu faces is The NeverEnding Story are absolutely frightening as well. Look at the challenges at the Southern Oracle. The first gate to the Southern Gate only allowed those who know their own worth to pass. A fancy knight is killed trying to pass. Atreyu who does know his worth, but face with possible death starts to doubt. It looks like the gates are going to kill him for it, but instead he runs. Knowing your value, doesn’t mean you’re the best or the greatest. It’s knowing we are worthy of this adventure called life. We are worthy of the challenges ahead of us. It’s also okay to doubt ourselves as well. It happens. Life throws some pretty scary challenges our way that we can’t see how we are going to make it through. Atreyu did have doubts and was afraid the gate responded. But he didn’t let the fear and doubt make him freeze. He ran and dived passed the gates. He demonstrated the great quote from Mark Twain, “Courage is not the lack of fear. It is acting in spite of it.” This is a powerful life lesson I’ve been working to embrace – even when I’m afraid I’m not enough, I’ve got to keep going.

The second lesson from Bastian’s role is that we get to create the world we live in. After Fantasia is lost to the Nothing except one grain of sand, Bastian gets to imagine Fantasia back into existence. I admit, I spend a lot of time and energy thinking about what’s wrong with this world. But there is power imagining the world as the world I want to live in. The way I wish it was – healthy, supportive, loving, connected. For change to happen, we do have to imagine different possibilities. I find that incredibly inspiring – through my dreams and imagination, I can create change by living towards my dream world.