I’ll be honest, I don’t know much about the southern coastal areas. I had heard the coast was beautiful, but I hadn’t heard much about the attractions or what to go see. So this is how we head into the south.

We drive through Virginia without stopping aiming straight for North Carolina. Originally, I had planned not to go to the coast until after Raleigh but decided to head straight to the coast and stay in Wilmington for the night. We headed out to the Carolina Beach Boardwalk to walk around. It had been raining again that night and the clouds hadn’t broken. The boardwalk ended up being very short and the rest is just beach lined by hotels and condos. If you want to sit on the beach and have a hotel room close by, this is the place for you. But I like my Santa Cruz Boardwalk much better with a lot more room to walk and rides and games awaiting me.

We then drove down to Myrtle Beach in South Carolina, which was about the same. Beaches and golf courses without much else to do. So we continue on to Charleston, South Caroline. Our first stop is the Tattooed Moose for dinner. I was hoping to eat dinner at a music venue, which was how Tattooed Moose was listed, but it was jukebox only with sports on the TV. Even so, this bar was great. A dive bar with a nice beer list. I did ask if we could watch the Giants play the Cardinals in the NLCS series. They had no clue I was asking for baseball and put on the football game. I guess baseball is not big in this area of the country!

After scrubbing ourselves up at the KOA, we went scrambling for coffee. Black Tap Coffee was ranked as the best coffee in Charleston and I can see why. The ambiance was warm wood with green succulent plants. They had single origin pour over coffee from Coffee Culture. But I enjoyed Black Tap’s specialty, the Mint Julep Cocktail. This drink was made with sweetened espresso poured over ice and then shaken with cream and mint. The drink was divine. It reminded me of the Unsinkable Molly, that Molly would make us at Contraband but the mint was a very special treat! 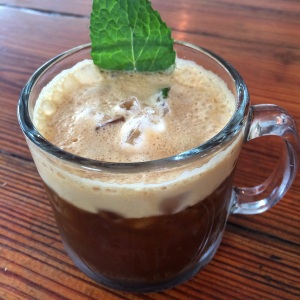 We then walked back to the car past a historic old jail that nature was starting to take over and some cool old alleys. Then, we came across the old Unitarian Church with had this gorgeous overgrown cemetery which I had to explore. Flowers, shrubs, bushes, grass, and trees all come to life in this southern humidity. I’ll be honest, it was the cliche picture I had of an old cemetery in the south, but even more so. 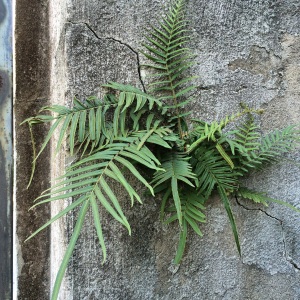 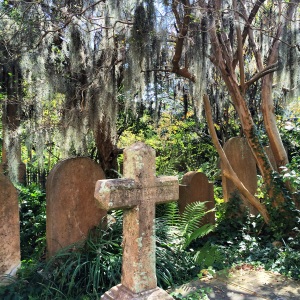 The heat and humidity were definitely already strong in Charleston, and my California ass is a wimp. But the good news is, I was not whining about the heat any where as badly as Dad was. However, when he said let’s go tour around from the car, there was no objection for me 🙂

We then went to another section of Charleston to grab lunch before we continued. The Glass Onion was a perfect stop. We had a super tasty Po’ Boy sandwich and sweet tea. After I watched Dad down 3 glasses of sweet tea, I could tell he really enjoyed it. I’ve been drinking it in the south, but it is really way too sweet for my taste.

Onward to Savannah we go, and head straight to our campground which is out in a marsh land outside of Savannah. The trees are absolutely stunning, huge oak with spanish moss. Plus, since it was a marsh there was water, a beautiful place to camp. 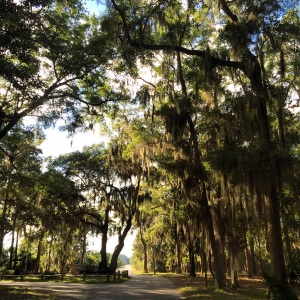 We head into old town Savannah to rest a bit. The Sentient Bean had lots of tables and excellent ice tea. I take the moment to work on publishing a blog. I also book tickets for Dad and I to take a ghost tour by carriage ride.

After resting up at the cafe, we go to City Market which is the super touristy part of town, but where our tour will start. Both Dad and I are hungry, and there is a great pizza place, Vinnie
Van Go-Go’s on the corner that serves New York style. We sneak right up to the bar and skip the line waiting for the tables and order two slices. It was absolutely perfect and didn’t take up too much time so we could make it to our tour. 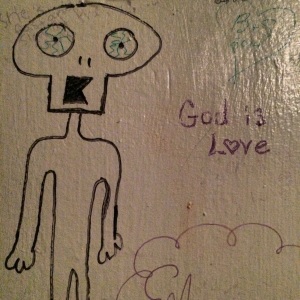 The ghost tour was fantastic. Our carriage was pulled by Guinness and Jim. I’ve never been on a horse carriage before so this was a special treat. Plus, to learn the urban legends and ghost tales of Savannah in October was fantastic. I see a few orbs floating in my pictures, but Dad thinks I’m full of it. I’ll let you decide! 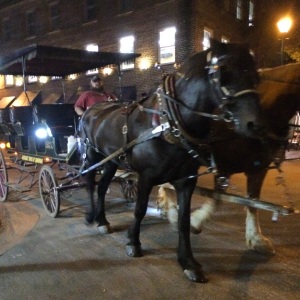 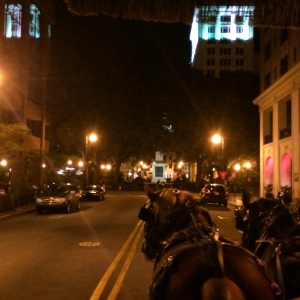 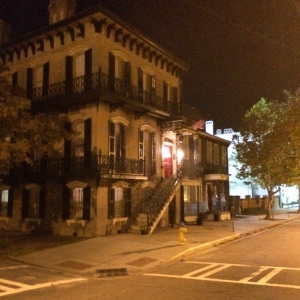 We head back to our campground on the marsh to get some sleep. We are definitely in the South and it is still in the 70s with 90% humidity. So the Rav 4 windows are rolled down, and Dad is sleeping with his door open. We had already been warned that the campground was having a raccoon issue. But dad didn’t care. About 12:30 a.m. I hear the rustling outside Dad’s door and I ask him if he can hear it. He’s grabs for his light and I try to grab my glasses. We see the raccoon scurry into the bushes.

I ask dad to close his door. I really don’t want to end up with a raccoon in the car with us. So even though it’s hot, I fall asleep. But I’m woken up again at 6 am and I wake up dad because it sounds like the raccoon is in the car behind the seat. He gets up and the raccoon scurries away again. This time Dad’s tea box is on the ground. The raccoon was trying to pull everything out so he could get to the food bag in the middle of the car.

I’m not super nervous of raccoons, but I really don’t want to be trapped in a small space like the back of the Rav 4. Raccoons do have sharp teeth and claws.

We finally get a little bit of sleep and start functioning enough to head back into Savannah to explore more. I do enjoy checking out cemeteries. They show so much about an area, and the cemeteries in Savannah are no exceptions. These cemeteries are not over grown like we saw in Charleston, but this is the first time the gravesides have sculptures of angels and become a lot more ornate. Also, the cemetery in the old section of town is segregated. The South Cemetery was for slaves and free Blacks. This cemetery was no where near as grand as the White Cemetery. 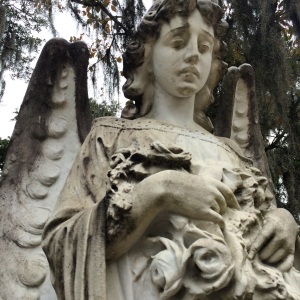 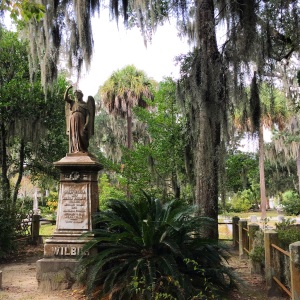 To finish the tour of these coastal southern cities, we drove through the historic victorian section of Savannah. The houses were beautiful and immaculately maintained. Savannah is just as beautiful as I imagined with the huge old homes, grand live oak trees covered in spanish moss, and ghost wandering the streets. 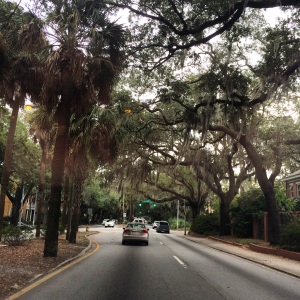